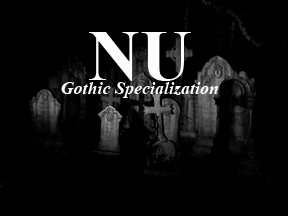 National University’s MA in English: Gothic Studies Specialization offers students a unique opportunity to explore this popular genre through novels, films, television, and in popular culture. This specialization (the only one of its kind in the US) allows students to focus on key areas of the genre while exploring the diverse representations of Gothic horror from the 18th Century to the present.

The Specialization in Gothic Studies provides a balanced and comprehensive program of graduate study in literature as well as a rigorous examination of the historical, theoretical and critical reception of the Gothic, from its origins in the eighteenth century through to a range of contemporary works in both literature and film. The program is appropriate for students seeking preparation for doctoral study or college-level teaching in English and related fields, or general cultural enrichment.

Students who seek an MA in English with Specialization in Gothic studies are able to study a wide range of Gothic topics in both core and elective courses. Topics explore both structures and themes in a variety of texts and media and as well as critical and theoretical approaches to the Gothic.

This course explores the darker side of Romanticism from Byronic heroes to religious extremism. We look at Romanticism’s complex and often contentious relationship with the Gothic not only in literature, but in politics and the aesthetics of the period.

In this course students explore Sensational fiction in works by Dickens, Reynolds, Collins and Braddon focusing on the influence of the Gothic genre.

This course explores American Gothic from the 18th century to the present.

Texts studied may include Charles Brockden Brown’s Wieland; or, the Transformation (1798), Henry James’s The Turn of the Screw (1898),  Shirley Jackson’s The Haunting of Hill House (1959) and a collection of short stories. See sample syllabus here.

This course explores the complex world of Graveyard Poetry in order to construct a better understanding of a period marked by intellectualism, exploration, hope, horror, gender- all helping us to see this ‘Age of Reason’ as it changed the world.

This course looks at celluloid horror.

This course introduces the Gothic through its major works from Walpole to Maturin.

Texts studied may include, amongst others, Horace Walpole’s The Castle of Otranto (1764), Matthew Lewis’ The Monk (1796), Ann Radcliffe’s The Italian (1797), Charlotte Dacre’s Zofloya (1806), Mary Shelley’s Frankenstein (1818), Karl Friedrich Kahlert’s The Necromancer; or, The Tale of the Black Forest (1794) and Charles Maturin’s Melmoth the Wanderer (1820). See sample syllabus here.

This course explores modern manifestations of Gothic horror from writers such as Michael McDowell, Dan Simmons and Stephen King.

Texts studied may include Michael McDowell’s The Elementals (1981), William Blatty’s The Exorcist (1971) and Dan Simmons’s Summer of Night (1991).

In this course we explore the rise (and fall?) of vampires from Polidori to Stoker and Le Fanu to Stephen King.

This course focuses on the ‘Female Gothic’, victimization and the patriarchy.

This course closely examines works built around the themes of sex, confinement and marriage in the 18th and 19th centuries. A course such as this helps us to understand what (and how) a novel “does” by analyzing the evolution (and corruption) of the domestic space. By understanding the ways in which the sociopaths, social norms and gender stereotypes change over time, we can better understand those changes occurring in the culture.

This course explores the influential works of Ann Radcliffe.

This course explores the evolution of the Gothic through the works of Poe.

Texts studied will include all of Poe’s work.